This past week was a busy one for us.  It began like all Monday mornings for me.  The alarm starts squealing at 5am.  I shut the alarm clock up and fumble for my glasses.  I check the bed to make sure it is still dry.  I should say I check my side; Monica can check her own.  I sit up and take off my Breathe Right strips.  I’m not sure if they help with my snoring but I have stopped waking up in a panic with a pillow pressed to my face.  I then shuffle off to the bathroom to shower and get ready for the day. 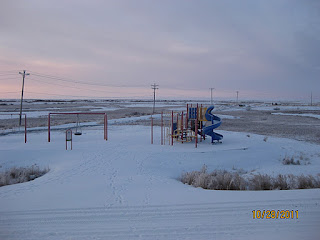 We had a teacher in-service on Monday, so we had no students.  A quiet day and we were able to get a lot done.  We also had our parent/teacher conferences last week.  The turnout was larger than I had anticipated.  I enjoy talking to parents about their kids and showing them what we are doing in class.  There seems to be a disconnect between some parents and their kid’s school career.  Formal education isn’t very high on some people’s priority list, mainly because knowing how to solve an algebraic problem doesn’t have much to do with hunting moose and catching salmon.  We are only two generations removed from everyone living a total subsistence lifestyle here.  This culture did not have a monetary economy; it was based on being able to gather resources to survive.  If you had more than you needed, you shared it with those who didn’t.  Their language was a verbal communication, not written.  Education was not done in classrooms formally but taught out in the tundra, learning by doing.  So I completely understand why some parents don’t feel that writing book reports are very important in their child’s life.  My job is to stand in front of their children and convince them that it is important. 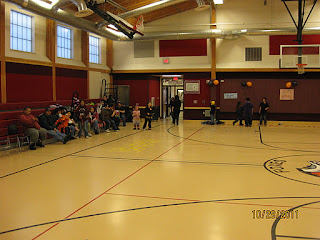 Friday night was our Halloween Carnival at school.  We had face painting, ring toss, a fishing booth, and Monica and I set up our X-Box with the Kinect.  We had it hooked up to a Smart Board, which is equivalent to a 60-inch screen.  Two hours of carnival time equals about ten hours of regular time.  We had a full house at the gym and a great staff who worked their butts off to make the carnival happen.
I also have a birthday tomorrow.  According to my driver’s license and every mirror I happen to look at, I’m reminded that I’ve made it half way to 90.  I can’t imagine what 90 will feel like.  Friday night I sprained my ankle sitting in a chair.  Not while actively taking a seat, but while I was already sitting down.  No weight on my feet.  I pivoted my foot and felt a sharp pain.  You’d think with all of the practice I’ve had, sitting on my ass doing nothing, that I could sit safely.  Guess not.
Now, we have to get ready for trick-or-treaters.  I wonder where we are as a society when we encourage children to dress as monsters and demand candy from strangers.  And if the candy is not awarded to the little extortionists, they threaten to do harm to our dwelling.  And while they’re doing this, their parents stand behind them, quietly encouraging them.  Luckily, eggs are a very expensive commodity up here so we don’t have to worry about getting egged.  Unfortunately, rocks are free.
Posted by Clay Miller at 11:53 AM No comments:

Fall is my favorite season.  The cooler air feels better in the lungs.  The leaves turn to colors that make even a drab countryside look spectacular.  We celebrate two holidays that require us to eat until we are ashamed of ourselves. We sneak up on unsuspecting animals, shoot them, have our pictures taken with them, and put that picture on Facebook, smiling with pride about how we outsmarted an animal that is still confused by headlights. Football starts Friday night and ends on Sunday night.  Fall is a grand three months.
Here in Nunam, fall lasts for about 7 minutes.  The grass turns from green to brown overnight.  Since we don’t have any trees here on the Tundra, there are no leaves to turn color and drop.   Just one day it snows and winter is here, no fanfare.  It’s like when you are out with a bunch of friends and the weird guy just kind of appears.  Or how most people describe it: “Crap, Clay found us.”
We finished our first quarter last week.  I’m looking at this school year like a football game.  It’s time to take stock in what we’ve done so far and make adjustments accordingly. I am seriously thinking about wearing a helmet and a cup next quarter.  Report cards are done and parent/teacher conferences are next week.  The time has gone by quickly and it has been a good quarter.
Next Friday night is our Halloween carnival at the school.  Last year I ran the bowling booth, with me being the pin-monkey.  (Insert your own cruel joke here.)  This year Monica and I will set up our Xbox with the Kinect to the Smartboard.  This will give the kids something new and will keep me from injury.  Last year with so much bending and squatting picking up those bowling pins, I was gimping around for days after that.  It’s like I aged a year overnight.
We had a Saturday Fun Day with my class this Saturday.  With the help of Monica and two other teachers here, Brittnay and Essie, we showed a movie, made spider hats, and served lunch.  It was a good time for the kids by all accounts.  At least nobody cried.  This was the second Fun Day we had this year and I’m trying to do one a month.  This gives the kids a few hours of activities on a Saturday.  There is no other place in town for the kids to go to.  They literally have no place to go other than their house or play outside.  As I’ve said on here before, we don’t even have a store in the village.  Now that it is below freezing in both the day and night, being inside where it’s warm is nice for the kids.
Now that we won’t see many days with the temperature above freezing, it might be time to drag out the cold weather parka.  I’m waiting for someone else to use theirs first so I won’t look like a wimp.  Nothing will put your manhood into question quicker than overdressing for the weather.  Or wearing white after Labor Day.  At least I can put my shorts away now and wear my Levis.
Posted by Clay Miller at 8:36 AM 1 comment:

October is here and cooler weather came with it.  We’ve had some hard frosts and we had snowflakes yesterday.  Nothing stuck, but it was still snow.  It isn’t light outside till 9am, so we get to see some nice sunrises during school; those never get tiresome to watch.
I spent part of last week in Hooper Bay, which is a larger school in our district.  Half of the district’s teachers met there for our in-service.  We flew out of here on Wed. and came home Friday night.  We were accommodated the floor of a third grade classroom.  I did have an air mattress, so at least I didn’t have to touch the floor with my head or side of my face.  Third graders are not discriminate about where they step so I can’t imagine good things being in the carpet.  Well, gummi worms are good, but not to sleep on.  Dog poop is not good for anything, especially not to sleep on.  Now I have to take another shower.
We talked about curriculum and classroom management.  Talking about curriculum is usually coma inducing and this time it was no different.  When talking about classroom management, it became teachers trying to out-story each other.  Everyone’s anecdote was worse than the others.  It seems that vampires and werewolves are alive and well up here too.
Anytime teachers clump together, a single phrase seems to always come up: teachable moments.  In college, they told us ‘teachable moments’ were times when something unexpected happens and you use that situation to teach something important to the student blah, blah, blah.  I have found that when something unexpected happens that is a good time to yell at students.  Last week I came upon an unexpected situation and I decided to leave what was said alone.
I was showing the class some pictures I took during a vacation to Washington DC a few years ago.  When the Lincoln Memorial picture came up, one of my 4th graders started to tell the rest of the class about the Memorial.  He pointed out that it is huge and that Lincoln’s hands are positioned so one shows strength and one shows compassion.  (I did not know that.)  The rest of the class was listening attentively as the student talked about Lincoln’s life as a lawyer and then as President.  He told the class solemnly that President Lincoln was shot in a theater while watching a play.  One of the students asked why he was killed.  The student calmly explained that Lincoln wore a tall hat and the guy behind him couldn’t see the play so he shot him.
I know, I should have corrected him and explained how Castro plotted with the CIA to kill Lincoln because of his views on Israel.  Wait, that was Garfield.  Anyways, I didn’t correct him because I saw the way the kids were listening to him.  They will learn soon enough why and how he died, but they will always remember that he was shot in a theater.  Another reason I didn’t correct him was because I was laughing so hard.  Quietly.
It is always fun to listen to what the kids infer or make up on their own.  But I guess they’re learning something, I know I am.  Transferring knowledge is important.  I for one will never wear a stovepipe hat where it can obscure the view of another patron in the theater.  Lesson learned Mr. Booth.
Posted by Clay Miller at 11:04 AM No comments: